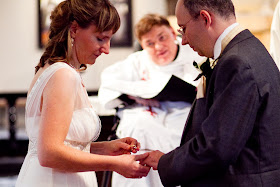 I was halfway through my lunchtime sandwich when I suddenly felt the disapproving stares from those squeezed in around me at the crowded cafe tables. I had sat there dozens of times before doing the same thing, but it was only now that I suddenly realised how it must look to others; a middle aged man swiping through dating profiles on a phone, his brazen infidelity revealed by the wedding band on his ring finger.


In truth the public censure was probably more a product of my own imagination than the reality of our atomised and screen obsessed society - it's highly unlikely that anybody would have been inclined to raise their gaze from their own phone for long enough to catch sight of the content on mine. But the fact that the thought occurred to me at all signifies a growing self consciousness about my wedding ring and confusion at the meaning it now conveys.

It's not the first time that I've felt self conscious about the ring. It took months after the wedding for me to adjust to it on my finger. Never having worn jewellery of any description before I was forever absent mindedly playing with it. But however strange the ring might have felt, I took its symbolism seriously. I was proud to be married and extraordinarily proud to be married to Louise. I belonged to her and wanted the world to know it. Every time that I caught sight of my left hand, or heard the clunk of the ring against another metal I felt a warm glow of satisfaction and contentment. I was finally where I had always wanted to be in life.

Now the symbolism is even more highly charged. In Louise's absence the ring has been the most tangible remaining proof of our commitment to each other. I may come home to an empty house every day, I may not have seen, heard or touched my wife in more than two years, but throughout that time I have only needed to glance at my ring finger to reassure myself that I am still married. This is not just about trying to convince myself that the link to Louise remains unbroken, that my status is unchanged. It's also a necessary reminder, as memories fade and the loneliness and emptiness of widowhood begins to feel more real than the life that went before, that our short time together actually happened. It was not a figment of my imagination. Hard though it is to believe, I have not always been a widower. There was once something more. Something incredibly special. There was once somebody who loved me.

Unlike some who quickly remove their ring, perhaps to place on a chain, mine has therefore remained firmly in place. So strong has been the attachment that I could not even bring myself to remove it in order to properly clean a wound when I cut my finger. In the circumstances the very act of taking the ring off, even just for a few moments, was too redolent with meaning to be able to contemplate.

And nor has the ring been on its own. Louise's wedding ring has sat on my little finger - the only one on which it would fit - from the moment I re-entered the house the day after she died and discovered it carefully put to one side for me to find. I convinced myself that the wearing of two wedding rings, one thinner and obviously designed for smaller, more feminine, fingers told the world the whole story; our love and marriage was still alive but only one of us was now in a position to display the symbols of it. I discounted the option of remodelling the rings and combining them into one, as many do, since it was important to me to retain a sense of the original, the look and feel of the rings that we exchanged on our wedding day.

But the presence of the ring, once such a comfort, is now beginning to feel increasingly incongruous. There is no loss of love for Louise. She will always remain my wife. It is, though, - and there is no contradiction here - becoming harder and harder to think of myself as being married. Louise has already been gone for half as long as we were together.  How many nights do you have to go to bed alone before accepting that you are no longer part of a couple? How many months without hearing the words 'I Love You'? How many years without physical intimacy? The answer will differ for each individual, but in my case I know that I am reaching my limit. The spiritual and emotional connection with Louise is as strong as ever but in the practical reality of day to day existence there is no real sense in which I can pretend to still live the life of a married man. How can there be when the closest I get to kissing my wife is her dressing gown, still on on the back of our bedroom door?

So someday soon it will be time to do what was previously unthinkable and transfer the ring to the equivalent finger on my right hand. There it will continue to display my love for Louise and confirm to the world, and myself, the fact that our marriage existed.

It will not completely remove the ambiguity. To my disappointment, an internet search for the meaning and symbolism of a wedding band on the right ring finger did not confirm a universal understanding of the practice as a sign of widowhood. The idea, in fact, hardly seems even to impinge on the consciousness of those strange people from whom I now often feel so utterly removed - the non widowed. There are, it appears, a vast range of other practical and cultural reasons why I might choose to wear my ring in this way. And while I like the idea of being mistaken for a musician, and am entirely relaxed about being wrongly identified as an Eastern Orthodox Christian, I'm much less keen on the thought that many will assume its code that signifies a willingness to cheat on a partner. Back, perhaps, to square one.

But even if the rest of the world doesn't understand, other widow(er)s surely will - we become finely attuned to the significance of the unusual arrangement of wedding rings. There is also always the hope that it might make dating just that little less complicated. After all, in the event that I was to pluck up the courage to ask a woman out, the presence of a wedding ring on my left hand would hardly be conducive to a positive response if she did not already know some of my story.

In any case there is a sense in which I still welcome that ambiguity of my status. It seems to accurately reflect the confused reality of widowhood; married but not married, in love but alone. My head begins to spin even faster when I contemplate that at some point in the future I hope to be simultaneously married and in love with one wife and in love with, but for the temporary duration of this life no longer married to, another. And always at the back of my mind the vague hope that one day, in some unknowable subsequent existence, I might have two wives and two marriages at one and the same time. Where would the rings go then?

Stuck in the quagmire of post grief depression, where the landscape is grey and flat, and the challenge of building a new life from scratch seems impossibly daunting, I need to demonstrate, to myself more than anybody, some kind of progress. Moving the ring feels like one way in which I can do so. The only questions that remain, then, are how and when it is to be done. The ring was placed on my finger with such public ceremony that it somehow feels as though some meaningful formalities should be observed to mark its removal. Instead, its much more likely to be done privately, almost furtively, at a random moment when the urge seizes me. It may even be repeated several times as, like so many others, I hesitantly experiment with and without the ring.

I expect that there will initially be guilt. Maybe some kind of misplaced sense of betrayal. Even just the writing of this post, the acknowledgement of the reality that time and distance inevitably and naturally bring about a degree of gradual separation, is painful. Objectively the transfer of the ring is just one more marker in this lengthy and ongoing process. There are countless others. Many have long since been navigated while some, such as the sorting and disposal of Louise's possessions, are still to be braved. But somehow this feels like the crossing of a personal Rubicon, a particularly profound statement about the person that I am now, two years after Louise's death, and the life that I lead as a consequence of it.

Acceptance is a word too easily bandied about by those who haven't found themselves in this situation. It implies the possibility of a simple point of resolution of the grief and sadness, a 'happy ever after' moment when we are 'cured' of the loss we have suffered. Credits roll, Lights up. No doubt it is comforting for many of those around us to think in these terms. The reality is, of course, much more complex, shifting and nuanced. There are aspects of Louise's death and my subsequent experience which I will never come to terms with, and nor would I want to. The scar of widowhood may heal roughly over but it will always be present and liable to cause pain, often at the most unexpected moment.

And yet my changed thinking about the ring does seem to represent part of an acceptance of sorts; acceptance that Louise isn't coming back and our marriage, in this life at least, is at an end. I repeat that it does not mean that I love Louise any the less, nor do I miss her or honour her memory any less than I did before. There is still barely a waking moment when she is more than a split second from the forefront of my mind. It does, however, mean that the emotional state I occupy and my practical reality have taken a further step towards realignment with each other. It also means that at long last I have begun the process of defining myself as somebody other than solely a widower, as somebody who is able to live in the present and is capable of looking forward as well as back.

It is time, therefore, to attempt to let go of something that I can no longer hold; a marriage that continues to exist only in my heart and my memory. And as I try to deal with the sadness and sense of loss that this entails I will take comfort from the thought that wherever the ring may be, now and in the future, it will always remain as precious and as imbued with the spirit of love as the day when Louise first placed it on my finger.